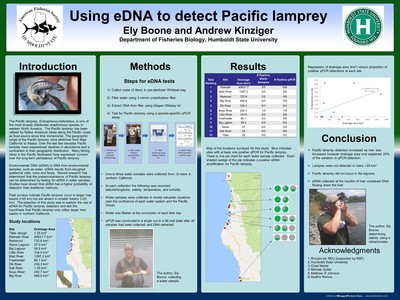 The Pacific Lamprey, Entosphenus tridentatus, is one of the most broadly distributed freshwater fish in western North America. The home range of Pacific Lamprey once stretched from Baja Mexico to Alaska. Over the last few decades, their population has declined with a northerly contraction up the coast. There are few management practices dedicated to the Pacific Lamprey compared to other anadromous fish. The habitat of the Pacific Lamprey is thought to be that of larger tributaries and excludes smaller streams. Other research has supported this hypothesis. Environmental DNA (eDNA) is a modern detection technique that is more sensitive and has a higher probability of detection than traditional methods. By using eDNA to compare large and small rivers, the modern sampling technique has provided more supporting evidence to the hypothesis that in Northern California, Pacific Lamprey only utilize large tributaries. This knowledge can aid in improved management practices.