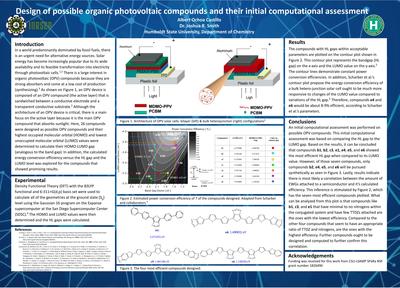 The excessive use of fossil fuels has surged the need for alternative energy sources, such as solar energy. Here, possible organic photovoltaic (OPV) compounds were designed and their initial computational assessment was done. OPV compounds are carbon-based and use organic electronics as a semiconductor to produce electricity from the sun. There is a large interest in OPV cells because they are strong absorbers and come at a low cost of synthesis. In addition, OPV cells can potentially be an alternative to silicon solar cells. As silicon solar cells are often difficult to recycle after they are retired and leave a large carbon footprint after production. Density Functional Theory was used to calculate the HOMO-LUMO gap of the 26 compounds designed. Finding the HOMO-LUMO gap is an important parameter that helps determine the electrical properties of a material. Semiconductors such as naphthalene, 1,1’-biphenyl, and ɑ-septithiophene were used as the backbone. The main electron-withdrawing group (EWG) used here is thieno[3,4-c] [1,2,5]thiadiazole, among other thieno-thiadiazole derivatives. Seven of the 26 compounds demonstrated adequate results and four of them will be further pursued in an attempt to synthesize. Lastly, results suggest there is most likely a correlation between the amount of EWGs attached to the semiconductor and its calculated efficiency.