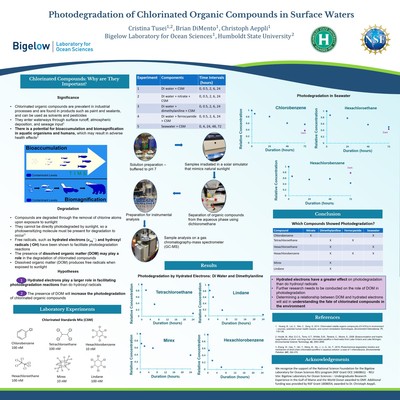 Chlorinated organic compounds are produced in large quantities and used in industrial products as pesticides and solvents. They leach into aquatic environments and pose a health risk to aquatic organisms and humans due to lengthy residence times and slow biodegradation. However, sunlight has the potential to photodegrade these compounds and abstract chlorine atoms through the reaction with hydrated electrons (eaq-) and hydroxyl radicals (∙OH). Dissolved organic matter (DOM) present in natural waters forms eaq- and ∙OH when exposed to sunlight and may facilitate photodegradation. While much research has been conducted on ∙OH, not much is known about the importance of eaq- in the degradation of chlorinated compounds in surface waters.

The research presented here explores the effects eaq- and ∙OH have on the photodegradation of a mixture of six chlorinated compounds in deionized and seawater matrices irradiated by simulated sunlight.

The results from these experiments suggest that hydrated electrons play a greater role in facilitating photodegradation of highly chlorinated compounds than do hydroxyl radicals. A clear depletion in four out of six chlorinated compounds was observed in irradiated samples in deionized water and with a source of eaq- . Although it cannot be said the results are statistically significant, a clear pattern is established. Initial experiments performed with natural seawater were not yet able to clearly identify the effects of and further experiments must be conducted to understand the role DOM plays in photodegradation.

These results may be used for future reference in studying the fate of chlorinated organic compounds. By understanding the characteristics of free radicals produced by DOM, it is possible to predict the degradation rate of harmful chlorinated compounds in natural waters.