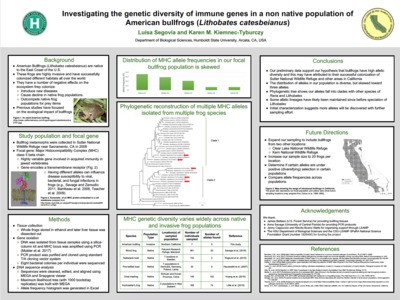 The American Bullfrog (Lithobates catesbeianus) is a highly invasive species that has successfully colonized different habitats around the world. Our project’s objective was to isolate and characterize the genetic diversity of a rapidly evolving immune gene in an invasive bullfrog population in California’s Sutter National Wildlife Refuge. The level of immune gene genetic variability in a population may help determine how resistant a population is to pathogens and how persistent an invasive population may be over time. Our hypothesis is that our focal population harbors high genetic diversity, consistent with its presence in Northern California for decades. To test our hypothesis, we amplified a Major Histocompatibility Complex (MHC) gene using polymerase chain reaction (PCR) and cloned the alleles from each frog. We then assessed individual heterozygosity, number of alleles in population and genetic diversity of those alleles using standard population genetic metrics. Finally, we compared the genetic diversity within this bullfrog population to that found in other frog populations, including both native and non-native populations. We found that the levels of diversity in our focal population were similar to the levels found in native populations of other species and higher than in native species that have undergone population declines.