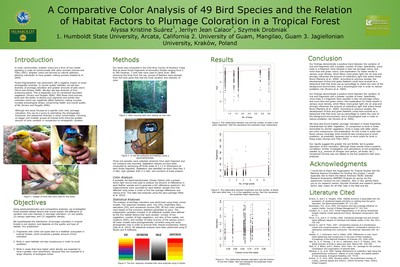 Over time, birds develop phenotypic traits, such as plumage coloration, that may allow them to blend in with their environment or simply stand out for various reasons. These traits can be expressed in three pigments: carotenoids, porphyrines, and melanins. These traits can be influenced by a number of factors, such as species diet, habitat, and ecosystems. To explain what environmental factors may have an effect on bird coloration and specific plumage pigmentation, we studied three habitat factors that act as proxies to the quality of environment, and that can affect variation and intensity of plumage coloration in a tropical forest. The three factors: habitat openness, vegetation diversity, and soil quality, were studied at seven forest fragments in Southern Costa Rica. Using a comparative color analysis among numerous bird species, we determined that birds in open habitats were less saturated in order to avoid predation. Birds in areas that had a greater diversity of vegetation had more color variation due to the fact that they were exposed to a larger diversity of ecological niches. Birds that were studied in areas with richer soil had greater color variation as well, due to a healthier ecosystem. Previous studies lack analyses focusing on these particular factors in relation to bird coloration. This study is important to understand the interactions of bird species within their abiotic and biotic environments and how these interactions can influence plumage coloration in a tropical forest, which in turn may translate into greater diversity of animal behaviors.