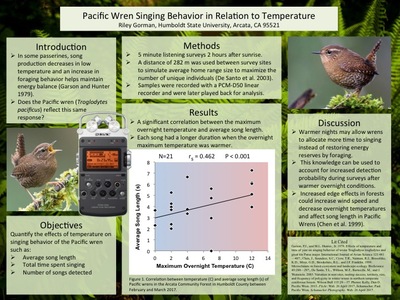 The effects of climate change on bird behavior have not been well researched (Moller 2010). Song production is believed to be energetically expensive (Johnson and Rashotte 2002) and a behavior that is mutually exclusive of foraging and resting (Thomas 1998). I studied how ambient and overnight temperatures affected the average song length, number of songs and total time spent singing in Pacific wrens in the Arcata Community Forest in Humboldt, California. Data was collected in 5 minute listening surveys with a sound recorder and later analyzed. I found that the average song length of Pacific wrens significantly increased after warmer nights. However, the number of days from the start of the surveys and overnight temperatures were also strongly correlated. It is possible that an increase in song length is either due to the onset of the breeding season or an increase in temperature or both. Knowing how temperature affects Pacific wrens could help researchers adjust detection probabilities for surveys (Slagsvold 1977) and evaluate how changes in forest structure and microclimates (Chen 1999) might affect their behavior.