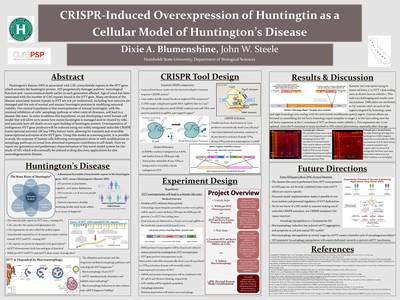 Huntington’s disease (HD) is associated with CAG trinucleotide repeats in the HTT gene, which encodes the huntingtin protein. HD progressively damages patients’ neurological function and causes eventual death earlier in each generation affected. Age of onset has been associated with the number of CAG repeats found in the HTT gene. Many attributes of the disease-associated mutant repeats in HTT are not yet understood, including how neurons are damaged and the role of normal and mutant huntingtin proteins in modifying neuronal viability. Our central hypothesis is that overexpression of normal huntingtin, with the eventual inhibition of cells’ autophagy pathway or other route of clearance, will lead to a disease-like state. In order to address this hypothesis, we are developing a novel human cell model that will allow us to assess how excess huntingtin is managed and/or cleared by cells, and precisely how cell death occurs upon buildup of huntingtin protein. Overexpression of endogenous HTT gene products will be induced using our stably integrated inducible CRISPR transcriptional activator (dCas9-VP64 fusion) tools, allowing for transient and reversible transcriptional activation of the HTT gene. Using this model as a starting point, it is possible to study the response of human cells following overexpression alone or with modifications to autophagy pathways to reveal how abnormal expression contributes to cell death. Here we report our generation and preliminary characterization of this novel model system for the study of HD, which will eventually be utilized in drug discovery applications for this neurodegenerative disease.