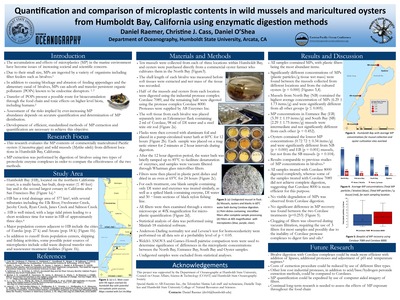 This research evaluates the microplastic contents of commercially maricultured Pacific oysters (Crassostrea gigas) and wild mussels (Mytilus edulis) from Humboldt Bay (HB), California. Ten bivalves were collected from each of three different locations in HB: North Bay, Entrance Bay, and South Bay. Oysters were purchased directly from a commercial oyster farmer who cultivates them in the North Bay. Bivalves were digested with proteolytic enzyme complexes, vacuum filtered, and microplastics were quantified by microscopic examination of filters. All samples contained microplastics, with plastic fibers being the most abundant items. Significantly different concentrations of microplastic particles (plastic particles/g tissue wet mass) were found between mussels collected from different locations and from the cultured oysters (p = 0.000). Mussels from North Bay contained the highest average concentration of microplastics (6.29 ± 1.73 items/g) and were significantly different from all other groups. Microplastic concentrations in Entrance Bay (3.39 ± 1.19 items/g) and South Bay (2.29 ± 1.75 items/g) mussels were intermediate and not significantly different from each other (p = 0.452). Oysters contained the lowest microplastic concentrations (0.72 ± 0.34 items/g) and were significantly different from North Bay (p = 0.000) and Entrance Bay (p = 0.001) mussels, but not from the South Bay mussels (p = 0.104). Half of the samples from each location were digested using the enzyme complex Corolase 7089 and the other half were digested with Corolase 8000, both supplied by AB Enzymes Inc. All samples treated with Corolase 8000 digested completely, whereas some of the samples treated with Corolase 7089 did not achieve complete digestion, suggesting that Corolase 8000 is more efficient for this purpose. No significant difference in microplastic recovery was found between the two treatments (p=0.253).